Goats have roamed the countryside in Spain since at least the 1500s, and goat cheese has surely been made that long too. Fast forward a few centuries to the 1980s, when Spain’s political rebirth served to usher in an era of experimentation, innovation, and new food ways including in goat cheese making. Today, cheese lovers everywhere are all the better for it.

You couldn’t blame Americans if they thought the only goat cheese made in Spain was the ever- popular Drunken Goat®. After all, Americans consume over a million pounds of it every year. Spaniards? Just a fraction of that.

While the cheese’s wine bath lends it its name, its compelling creaminess and hint of regional red wine in the flavor keeps cheese lovers coming back for more. The Spanish government takes the cheese seriously enough to have conferred it with Denomination of Origin status (DO). This means that the cheese, known as Queso de Murcia al Vino in its home country, must follow strict guidelines to legally use that name. Among the provisions is that it must be made in the province of Murcia in southeast Spain with the pasteurized milk of the Murciana-Granadina goats.

Still, Queso de Murcia al Vino is a far cry from the only goat cheese made in Spain. Indeed, Spanish goat cheese traditions go back centuries. Sometimes called the “poor man’s cow,” goats took up less space and were generally easier to care for than cows. Today, beautiful goat cheeses are made throughout Spain, some beholden to tradition and some – creations of the new cheesemakers. 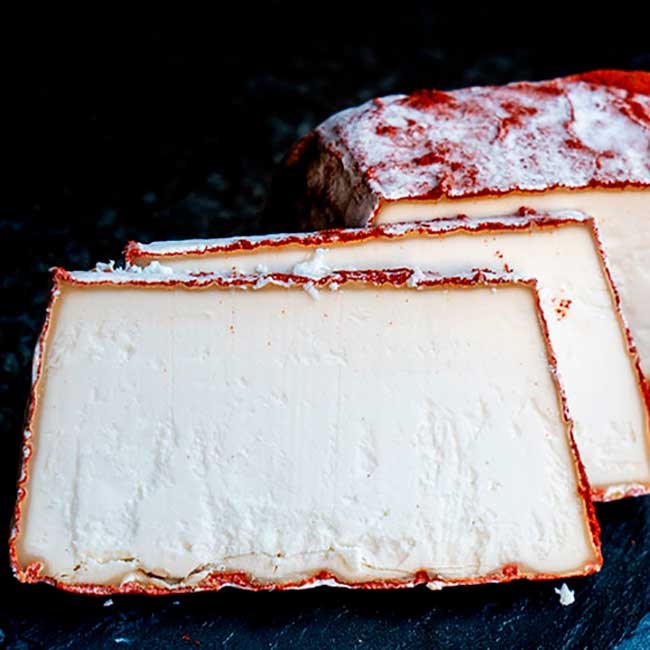 Sometimes called the granary of Spain owing to its extensive wheat and other row crops, Castile-León is Spain’s largest autonomous region. More than half that land is agricultural, which is partly what drew Óscar Fernando Marcos González to cheesemaking despite the unlikely path that led him there.

Oscar worked in mining, not agriculture, but working with machines was purely a job for him, not a passion. That awareness led him to a cheesemaking course being offered by the government, which was endeavoring to stop the accelerating exodus of local residents to urban areas by teaching them skills they could use in the region. He was hooked.

Armed with a little education and a lot of motivation, Oscar, along with his wife, Patricia Viñuela López, set out to make goat cheese. Their aim was to make a cheese similar to the traditional cheese of the area called Babia and Laciana valleys.

Using their own Murciana goat’s milk, Oscar and Patricia’s operation became a full-time undertaking making and selling cheese locally. At this time, a fortuitous encounter with the American cheese importer, Michele Buster, co-owner of Forever Cheese, set Óscar and Patricia on their way to the cheese they would christen Leonora®, named for its provincial home. It also made them instant cheese exporters - a role they never dreamed of.

Trial and error led to success for Óscar and Patricia on both sides of the Atlantic. The rectangular-shaped cheese, a nod to the bricks used in the area to build houses, was embraced by retailers, likely because of its lemony yet balanced savory and buttery flavors. The slightly wrinkled rind that encases it – a feat that recalls the collaborative effort between Óscar and his American importer -- is almost as compelling as the cheese itself, rustic yet uniform in thickness and intention.

Also beautiful is Óscar’s new version of Leonora® called A Fuego. For this, he showers the cheese with a copious amount of spicy Pimentón a la Vera, a special type of Spanish paprika. With its smoky and spicy flavors and rich brick red color from the pimentón, the “fire” in its name is apt. As it ripens, a snowy white rind grows over the paprika to create a visual layering effect – white, red, and a light ivory paste. On the palate, notes of lemon, spice, and smoke come together in one savory bite. Gorgeous inside and out, this “queso nuevo” is not just new for Oscar but a representation of cheesemaking innovations happening throughout Spain.

A cheese borne of history

No mention of Spanish goat cheese can exclude Garrotxa. The cheese and town of the same name in the Catalonia province of Girona, is more than just a cheese – it is a symbol of a desire to revive traditions and sustain the land.

It was the 1980s, and already artisan cheesemaking was starting to flourish. Add to that the migration of university-educated people from cities to rural Spanish villages who were looking to make new lives and a living out in the country – the so called neorurals – and the seeds of the “new” cheesemaking harking were firmly planted.

The production of Garrotxa cheese was more of an evolution than it was a specific goal. It was the 1980s and already artisan cheesemaking was beginning to flourish. Two couples near Garrotxa decided to start a goat cheese operation and called upon Spanish cheese expert Enric Canut to help them. Although their original goal was to make a soft, approachable goat cheese, they soon discovered it became moldy quickly, which meant a short shelf life. Rather than fight the mold, they embraced the idea and introduced a specific mold strain to the cheesemaking process that they thought might help improve it. The end result was a cheese with a thin yet protective rind and one with a sweet flavor and creamy texture rather than the more acidic fresh-style version. It was a far cry from their original intent but almost certainly a lot better. This became Garrotxa.

Today, there are 13 creameries that make Garrotxa cheese – a cheese that in a way represents a back-to-the-land movement and cheese innovation all in just one two-pound (.9 kg) wheel. 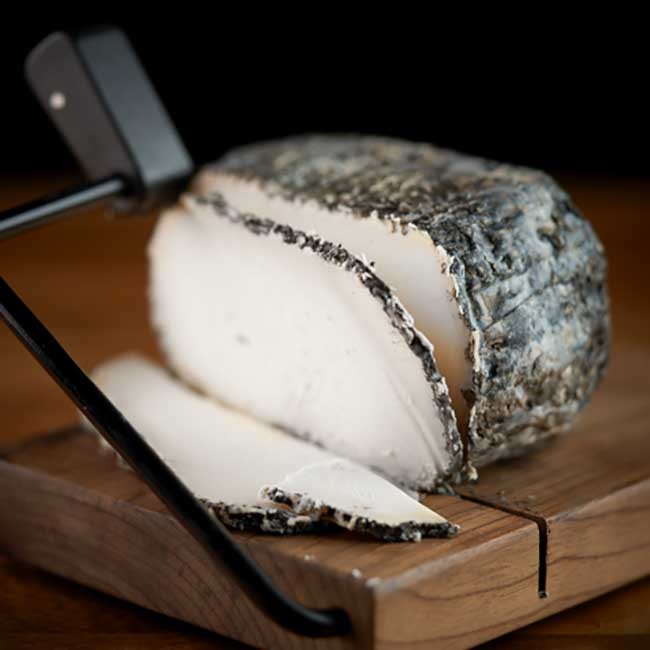 Also in the 1980s and also representative of the rebirth of Spanish cheese is another Canut goat cheese co-creation, Monte Enebro. Developed in Ávila, Spain, with famous cheesemaker Rafael Báez, the rectangular shape of the cheese, sometimes called “Pata de Mulo” or mule leg, is just one of its distinguishing characteristics. Its shades of gray and deep blue along with a white mold dusting instinctively draw your eye. The lemony paste with a hint of earthy, blue cheese flavors on the finish keeps you coming back. 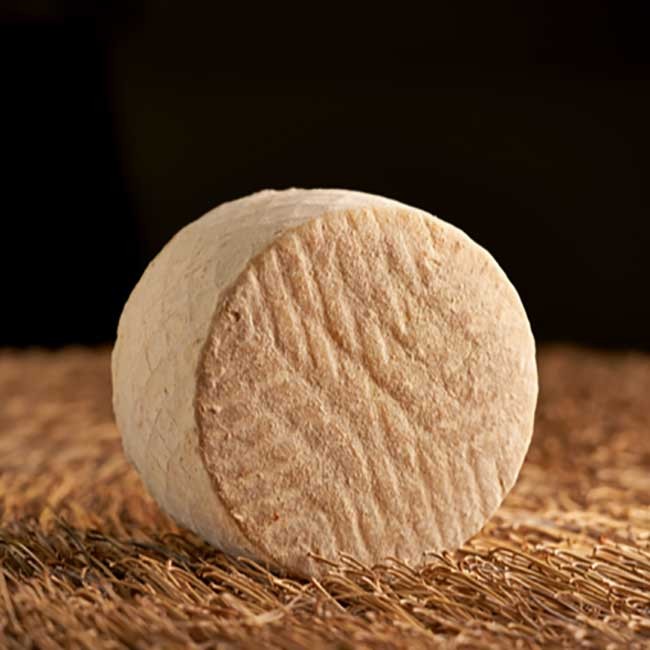 It’s a long way from mainland Spain to the Canary Island of Fuerteventura, but cheese has a way of making a geographical expanse seem a whole lot smaller. Majorero goats roam on this island and wheels of the DO semi-hard cheese of the same name have been made there for hundreds of years.

Although Majorero may be the best known of the Canary Island cheeses, one cheese operation is expanding its cheese selection by not only drawing on the island’s traditions but so too its ubiquitous corn crop.

That operation is Grupo Ganaderos de Fuerteventura, and Cabra al Gofio is the cheese. Toasted corn flour – “gofio” – coats the small format, semi-hard cheese to create a gritty texture on the surface and a compellingly sweet flavor in the paste.

The joy of the cheesemaker

Transcending cheesemaking of all kinds of cheeses in Spain is the spirit of the cheesemaker. A conversation with Óscar González, maker of Leonora, exemplifies this. When asked how he likes to enjoy his cheese the most, instead of saying bread or wine, his answer, “with great company.” That’s Oscar – consummate cheesemaker and a refreshing personality who makes one cheese at a time and in the process sustains his family, and in a way, an entire region.

Tortas Cheeses: A Dip Into History