Madrid Fusión Alimentos de España, the leading international gastronomy conference, began yesterday with a celebration of its 20th anniversary and a focus on shining a light on gastronomy's "forgotten" elements.

The 20th edition of Madrid Fusión Alimentos de España, the leading Spanish gastronomic conference, kicked off by highlighting the role of chefs. If, in previous editions, the emphasis had been on the product, this year there was no doubt about it:  the focus was clearly on the people capable of elevating the best raw material even further. Rodrigo de la Calle, an expert in creating haute cuisine with vegetables, fired up the main stage with an interesting presentation on the possibilities of mature vegetables. On the same stage, Joan Roca appeared to talk about the dishes that have surprised him the most those created most recently at his "paradise of creativity," El Celler de Can Roca, among them one prepared by a Dutch stagiaire reminiscent of the landscape of Mas Marroch, the restaurant's farm and prepared with vegetable leftovers. 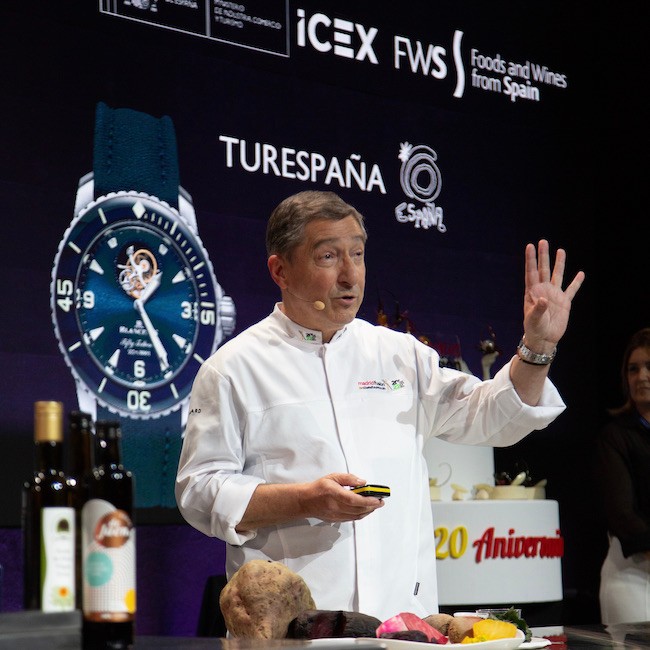 In the auditorium, the image of the day was also created:  a "family" photo to commemorate the conference's 20th anniversary. Everyone was there, from Elena Arzak and Albert Adrià to Quique Dacosta and Diego Guerrero, together with illustrious representatives of Ibero-American cuisines such as Álex Atalá, from Brazil, and Gaston Acurio, from Peru. In MF Pastry, the space dedicated to baked goods and pastries, Albert Adrià and David Gil offered a look at elBarri's sweet creations, with a focus on "fruit and seasonality," according to Adrià.

Vineyard recovery, dining room service, and the new wines from Jerez at The Wine Edition 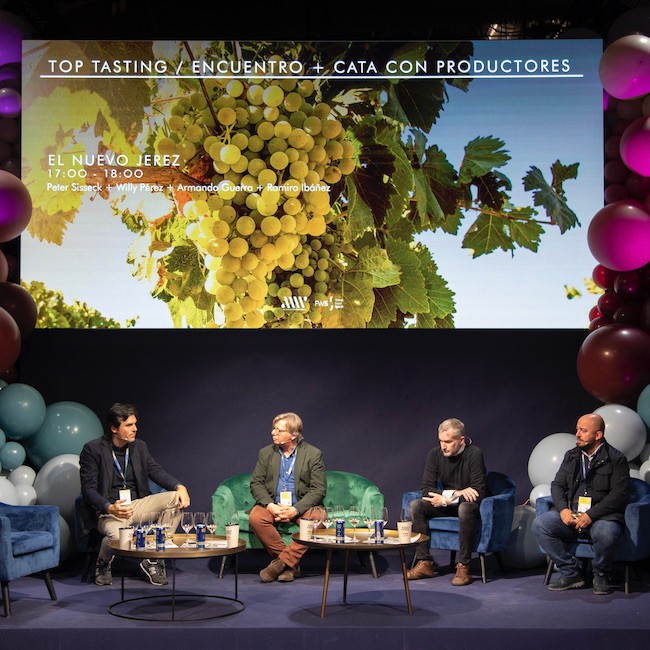 All the excitement and emotion surrounding the world of wine was palpable at the 2nd edition of The Wine Edition which, sponsored by Foods & Wine from Spain, got off to a strong start. During the first presentation, winemakers like Telmo Rodríguez explained the different projects underway in Spain seeking to recover vineyards in mountains, from Galicia to the Canary Islands, where some of the best in Spain are located. José Antonio Navarrete, sommelier at Quique Dacosta Restaurant; Annegret Kühner, from Noma (Copenhagen); and Ferrán Centelles, the former sommelier at elBulli all discussed issues related to dining room service, especially how to create a relaxed, informal ambiance to make customers feel as comfortable as possible.  The morning session concluded with Mohamed Benabdallah, sommelier at Etxebarri, who explained different meat pairing possibilities.

Pedro Ballesteros, Master of Wine, took over in the afternoon, explaining the peculiarities of the wines from the Spanish-Portuguese border and comparing six wines together with Pedro Ramos, sommelier at Lisbon-based restaurant Alma. The highlight, however, was a roundtable discussion on the new wines from Jerez. Peter Sisseck presented his new project in the area, in which he has sought to "pamper the vineyard," while Willy Pérez, winemaker at Bodegas Luis Pérez, and Ramiro Ibáñez, a wine grower, talked about their efforts to recover old vineyards and former winemaking methods. The perfect symbol of an inaugural day in which bridges were continuously built between the old and the new, as befits an edition marked by such an important anniversary. 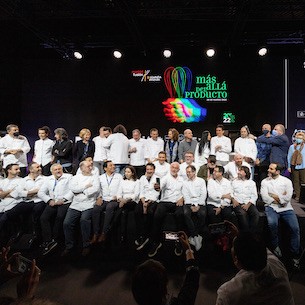 Where we are
Spain Food Nation