Healthy, delicious, versatile and oh-so-appealing on a cold day, winter’s favorite vegetables brighten up the season.

By now winter has fully captured us in her icy grasp, and as we soldier on during these cold and dark –though sometimes beautiful – days, our bodies long for sustenance that is hearty, healthy and, above all, delicious. Enter winter’s delectable vegetables.

Colorful crucifers, versatile leaf vegetables, flavorful artichokes, and crisp salad greens are still offered up by the frozen earth. Although some can be eaten raw, many of these vegetables come into their own when cooked – whether boiled, steamed, baked, grilled or roasted. Others are most-often enjoyed when canned or bottled in water, brine or olive oil. Together they are the protagonists and supporting actors in Spanish dishes that range from the most traditional to the most Avant-garde. Let’s take a look at the bounty of Spain’s winter vegetable harvest.

Broccoli, cauliflower and the elegantly-knobby Spanish romanesco, as well as leafier relatives like cabbages and greens, are all cruciferous vegetables of the family Brassicaceae (also called Cruciferae). For our intents and purposes we are going to talk about the former as though they were in a category all their own, which is how people tend to think of them.

The flowering-head of the Brassica oleracea plant, broccoli is one of the most popular vegetables among Europeans and North Americans, and much of the broccoli that is sold in these international markets comes from Spain, the world’s third producer and primary exporter of this vegetable. The heart of Spanish broccoli country is without doubt the Region of Murcia, located in Spain’s southeast corner in the Mediterranean basin. The popularity of broccoli has soared in recent years thanks to its nutritional benefits, which include high amounts of vitamins A and C, as well as phytochemicals (glucosinolates, flavonoides and selenium) – important for their antioxidant and anti-aging qualities. Broccoli has also experienced a culinary revival among Spanish Avant-garde chefs.

One of the greatest culinary champions of broccoli and its close cousin, cauliflower, has been Madrid-based, Michelin-starred Spanish chef Rodrigo de la Calle, the founder of the pro-vegetable culinary movement known as Gastrobotánica. Some of this chef’s past recipes have included dishes like Cauliflower cooked in seaweed water and fried, accompanied by warm mayonnaise with lavender essence, and Cruciferous vegetable couscous made with broccoli, cauliflower and romanescu. Other chefs, including Toño Pérez of the two-Michelin-starred Atrio restaurant (Cáceres), prefer to incorporate these crucifers in supporting roles, as in his recipe for Ibérico pork pluma with almond and cauliflower cream and aniseed-flavored young shoot juice.

Home cooks have also discovered the versatility of these vegetables, with dishes like “cauliflower rice” becoming ever more popular in an increasingly health-conscious society. And those in search of a mild and slightly sweet raw product should try Protected Geographic Indication (PGI) Coliflor de Calahorra, from La Rioja.

Other popular winter crucifers in Spain include white cabbage, red or purple cabbage, (known here as lombarda), and curly kale and turnip greens, which are found primarily in the north. All of these Vitamin-rich vegetables have long played an important role in traditional winter gastronomy in Spain, particularly in many of the classic regional stews.

Cocido madrileño, the typical stew from Madrid, would not be the same without its side of white cabbage. The same is true of the traditional stew from Cantabria, which combines cabbage with white beans, potatoes and various types of pork. Red cabbage is a staple at Christmastime in many parts of Spain, often sautéed in extra virgin olive oil with apples, raisins and pine nuts. And wintertime in the northeastern Spanish region of Galicia is synonymous with the dark leafy bunches of berza (curly kale) and grelos (turnip greens), the latter having PGI Grelos de Galicia status. These intensely-colored greens are packed with nutritional benefits, and are key ingredients in traditional Galician dishes like Lacón con grelos (ham with turnip greens), and Caldo Gallego, a traditional soup made with white beans, chorizo, berza, salt pork and potatoes. Fortunately, the popularity of these healthy greens extends beyond Galician borders and avoids seasonal limitations in the form of top-quality, vegetable preserves.

The exquisite quality of Spanish artichokes (a kind of thistle) also makes them winter favorites. The Blanca de Tudela variety is grown in southern and southeastern Navarre (in northern Spain) and protected with PGI Alcachofa de Tudela status. The artichokes are planted at the start of August, and their harvest is carried out in a staggered fashion, beginning in mid-October, and lasting until the arrival of the first frosts in December. The plant has a second budding, which is harvested between February and June. In general, the artichokes harvested in the autumn and spring are eaten fresh, while the winter crop are either canned or bottled to be enjoyed year-round. 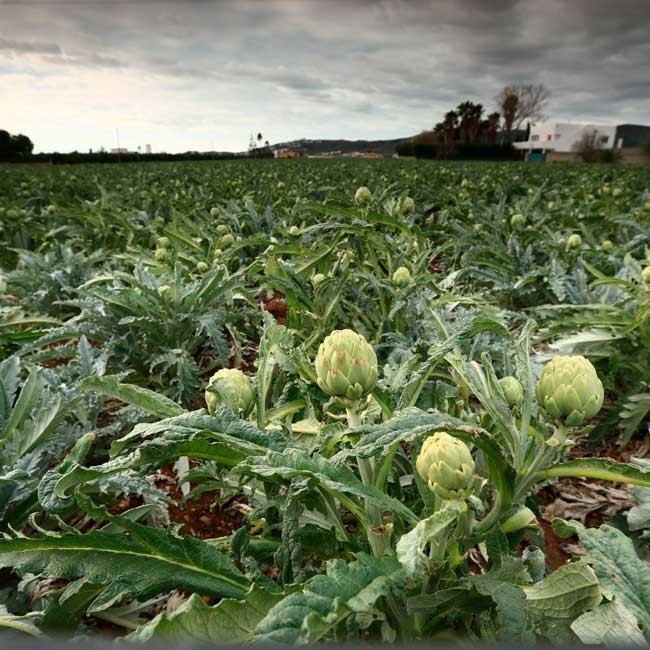 The main growing region for artichokes in Spain is actually on the east coast, and the Blanca de Tudela variety artichokes from Benicarló, in the province of Castellón are recognized by Protected Designation of Origin Alcachofa de Benicarló status. Also grown for consumption as a fresh vegetable, the crop is harvested from approximately October to May, with a slight pause in January.

Artichokes, which have been cultivated in Spain since at least the Middle Ages, are treasured as ingredients in traditional dishes like the simple and delicious Artichokes with Ibérico ham, or any variety of more elaborate, Avant-garde dishes like Creamy artichoke rice with clams and Manchego cheese by chef Oriol Rovira, and Artichoke broth, vegetable micro-wafers, broad beans and peas by chef Enrique Martínez.

Traditional and modern Spanish cuisine also embraces another member of the thistle family, cardo, or cardoons (Cynara cardunculus). Although the flower buds of cardoons can be eaten, they are often used as a vegetable rennet for cheese making in Spain (typically in Extremadura). The true attraction of these plants is the innermost part of their spiny white stalks. Cultivated primarily in northern Navarre and neighboring La Rioja, the plants are typically buried in mounds of earth to protect the stalks from sunlight, and then harvested from November to February. A staple of Christmas dinner in this region, the stalks are painstakingly peeled and boiled, and then typically prepared with a rich and delicate almond sauce. For a more innovative take on these traditional Spanish vegetables, Rodrigo de la Calle offers a dish of Clams in seaweed steam with essence of pink grapefruit and curled cardoon. Since the season for these gastronomic treasures is so short, they are also often sold as vegetable preserves or bottled in either water or brine.

By no means limited to the summer months, crisp and delicious salads conserve their place of pride on Spanish winter tables. One of the most common fresh winter salad greens is escarole (Cicorium endivia), a curly leafed plant sometimes known as frisée that is grown widely in Catalonia, Valencia and Murcia (as well as in provinces such as Badajoz, Granada and Toledo). It often appears on Christmas tables as a salad adorned with pomegranate seeds and mandarin orange wedges – other Spanish winter crops. Another is the Belgian endive (Cichorium intybus), whose juicy and faintly bitter leaves are often served with piquillo pepper preserves, quality canned Spanish tuna and chunks of fresh cheese. The possibilities are truly endless. Both plants can also be sautéed or added to soups and stews, and are high in fiber and rich in vitamins A and K and in folate.

Cruciferous vegetables, leafy greens, artichokes and endives are just some of the winter vegetables that brighten our gastronomy in the coldest months. Vibrantly colored Swiss chard, celery and root vegetables also bring cheer to Spanish dishes and palates until the milder spring temperatures return. There is no time like the present to stock your pantry with the healthy flavors of winter in Spain.