Spain was fortunate to recently welcome cheese expert Laura Werlin, who attended the Madrid Fusion gastronomy summit with a view to learning more about the sector. 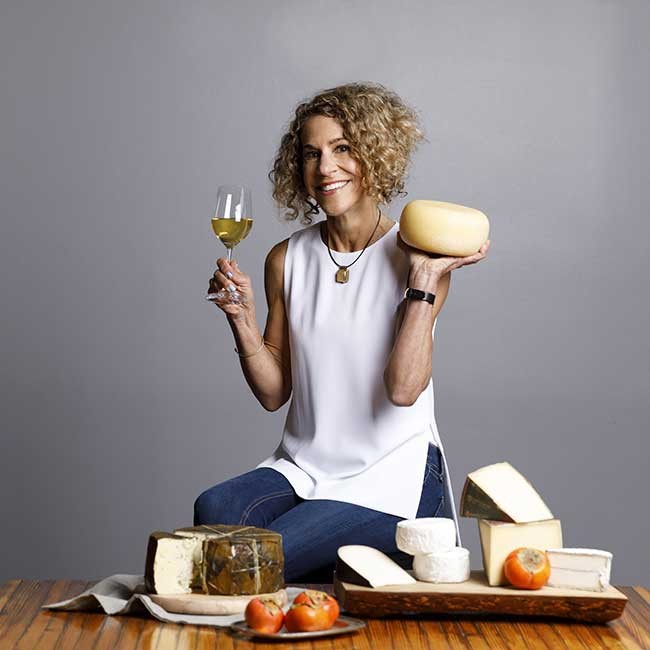 Werlin is not only a media personality and popular public speaker, but she’s also a James Beard award-winning author of six books about cheese. During her visit she tasted a very wide variety of cheeses from every corner of Spain and learned about our cheesemakers’ distinct processes and our cheeses’ unique properties.

We wanted to hear more about her experience in Spain getting up-close and personal with the Spanish industry, so we interviewed her. Keep reading to hear what surprised her about cheese from Spain, which cheeses are her favorites and why, how Spanish cheeses compare with those from other countries, and much more.

Having visited Spain recently, what did you learn about Spanish cheese? What surprised you the most about this particular industry in Spain?

One of the things that struck me about Spanish cheese was the wide variety of cheeses that are being made there from all different regions. I tasted a spectacular sheep’s milk cheese from Murcia, which is known for its goat cheeses, not sheep. I learned of some beautiful cheeses from the Asturias region. And at Madrid Fusión, I tasted unique cow’s milk cheeses from the island of Menorca. These are cheeses that are rare in the United States, so I happily took a trip to Spain to learn about them.

In addition, I appreciated the way many cheese shop owners are working with cheesemakers directly to support them. Not only are they buying their cheeses but, in some cases, they’re also helping guide them as to what consumers are looking for and what does and doesn’t sell and why, and they’re even offering help with shipping.

What are your favorite Spanish cheeses and why?

I have many Spanish cheese favorites. Just as with cheeses from other parts of the world, what constitutes my “favorite” varies with my mood. That said, I love soft cheeses, so the Torta del Casar is always a favorite. It’s meaty, aromatic, and super complex. So too Monte Enebro – a creamy, ash-rinded, wide, flat log-shaped goat cheese with a hint of blue mold. I love the fluffy texture but also the surprising hint of blue mold flavor.

I also like Los Cameros, a firmer mixed-milk cheese that is buttery yet savory with a hint of caramel, as well as its sister cheese, Los Cameros Queso de Cabra, which is, of course, made from goat’s milk.

So too Garrotxa – another firmer goat cheese that is savory, satisfying and, as I learned, quite varied depending on the producer. I love Cabra Romero – a rosemary and Ibérico lard-coated goat’s milk cheese which, while semi-firm, becomes a bit creamy in the mouth. The flavor from the rosemary coating penetrates the entire cheese without overwhelming it to create what becomes a little like sautéed rosemary “jamon.” Nothing not to like! And I learned that not all Idiazabals taste alike. I absolutely loved the ones I tried in Spain, though I don’t know their specific source(s).

In your opinion, how are Spanish cheeses different from those from other countries, like the US, France, the Netherlands or Italy?

Just as with the cheeses from other countries, Spanish cheeses have their own points of view. The soft sheep’s milk cheeses tend to be thistle-rennet cheeses, which are very particular to the region in which they’re made.

Manchego is as iconic a cheese as there ever could be. But the milk from the La Mancha sheep, the way the cheese is made including the reed-patterned molds in which they are aged, the many styles in which it is made – raw, pasteurized, aged short and long – makes it uniquely Spanish.

In addition, Spanish cheesemakers are innovating in ways I’ve only seen American cheese makers and, more recently, Swiss cheesemakers, do. They are looking at their milk source, their terroir – i.e. what the land and weather provide – and are creating their own recipes accordingly.

I tasted a brick-shaped cow’s milk cheese called Panzaburro at Quesería Cultivo in Madrid that knocked my socks off. Part of the reason is that owner, Rubén Valbuena, started a program at his family’s queseria in which they bring in cheeses from cheesemakers when they’re only a few days old. They then mature them by introducing them to molds and beneficial bacteria that the cheesemakers themselves might not know how to do.

Cheese-aging is an art, which Rubén and those at his queseria (called Cantagrullas, which is so named for the gray cranes in the area) are proving. They rub the Panzaburro with very specific hard-to-get molds they literally transported from elsewhere and introduced them to their aging room. The result is a dusty rind with a variety of red, tan, white, and other molds that make the cheese as rustic and beautiful as it is incredibly buttery and flavorful.

Rubén has many other unique cheeses at Queseria Cultivo including his own creamery’s Braojos, a raw sheep’s milk cheese with a very complex, slightly crusty, edible, mushroomy rind and creaminess for days in the paste.

What is the current status of cheese from Spain in the overall cheese landscape in the US? What are the most well-known varieties? Would you say that US consumers are familiar with Spanish cheeses?

If you ever find yourself in #barcelona and you love #cheese (hello!), then you MUST go to this shop. #local #spanish #artisanal #cheeses with the #nicest and most #passionate #cheesepeople I’ve met in a long time. #dedicated #lovely #kind #realdeal @lletcrua

I’m not really qualified to answer this question. Instead, a retailer would be in a better position to do so. Without a doubt, however, the best-known Spanish cheese is Manchego.

As for Spanish cheese familiarity in general, I’d say there’s still a vast untapped market in the US. People know about Manchego, but after that, casual cheese eaters would likely be hard-pressed to come up with names of other Spanish cheeses. They might know them by sight, such as Tetilla, but after that, I’m not sure what they do and do not know.

In terms of quality, are Spanish cheeses on a par with international cheeses?

Unquestionably. They ARE international cheeses, and I see no difference between them and those from other countries. Of course, a vast geographical region like Spain naturally means a wide variety of cheeses. The diversity makes Spanish cheese endlessly interesting. But it also makes them harder to pinpoint. While personally, I think that’s a good thing – I know that each Spanish cheese I taste will be different – it also makes for more of a marketing challenge.

A country like Switzerland is beginning to diversify its cheeses as well, but even still, most people think of that country as producing traditional alpine cheeses – meaty, brothy, nutty, fruity, caramel-y. That makes the category of “Swiss cheese” easier to grasp for the consumer.

In your opinion, which cheeses from Spain have the potential to be the most popular among American consumers and why?

I don’t think there’s anyone cheese or group of cheeses that is likely to be the most popular among Americans, but again, not being a retailer, I may not know. Like people everywhere, Americans gravitate toward cheeses that satisfy them from a textural and flavor standpoint. It’s as simple and yet as challenging as that.

The biggest challenge is exposure. After that, they’ll go on their own discovery to find the cheeses within Spain they like. That said, I don’t think there’s ever been a super creamy cow’s milk cheese that Americans haven’t gravitated toward – e.g. triple cremes and bries. However, Spain is not known for that style and because of that, might do well to develop a cheese or two like that on a big enough scale to export it.

Still, that’s a style that is associated with France, so really, I’d encourage Spanish cheesemakers to come up with their own high-quality cheeses just as they’re already doing. A great cheese, no matter what style, will almost always find a market as long as there’s some marketing help behind it.

In the end, importers and retailers are the best sources of information on this topic as they are the ones who receive consumer input first-hand.

What types of wine pairings would you recommend with Spanish cheeses?

Wine pairings depend entirely on the type of cheeses one is pairing them with. If they’re firmer style cheeses like Manchego, then medium- to full-bodied reds like Tempranillo and Garnacha would be the way to go with the more aged ones.

For the younger ones, a Bierzo might be the way to go. The lighter, creamier goat’s milk cheeses tend to go with the bright Spanish whites like Albariño, and the stronger, saltier cheeses like Cabrales find their match with Pedro Ximénez sherry.