This is the most desirable cut from tuna, one that fills the mouth with luscious, unctuous fat but with a clean meatiness. Pure umami rooted on tradition.

Every spring, along Spain’s Atlantic Coast, anticipation builds for the almadraba. For millennia, the people from this powerful and beautiful stretch of coastal Andalusia have looked forward to tuna season. After a year feasting in the cold waters of the Atlantic Ocean, great schools of Atlantic bluefin tuna return to the Mediterranean to spawn in their ancient breeding grounds. These large, athletic fish weigh between 225kg – 250kg and are one of the most sought-after in this seafood loving nation. During their time in the cold, fertile Atlantic, the tuna put on fat in their deep red flesh to protect them from the cold and help them survive the breeding season in the less abundant waters of the Mediterranean.

Before the tuna arrive, fishermen set their sets in the waters off the historic towns of Barbate, Conil, Zahara and Tarifa, south of Cadiz, as they have done for thousands of years. The fishermen work together, laying out an underwater labyrinth of nets with a large wide open mouth. This maze of nets leads to a corral called el copo. The word almadraba is Andalusian Arabic for ‘a place to strike’. When the tuna come through the Straits of Gibraltar, they hug the coast, and some find their way into this maze and into el copo. This final net is lifted in a move called la levantá. Now the experienced fishers with a keen eye spot the prime tuna, which are quickly dispatched, lifted onto waiting boats, and taken onshore for processing. With its limited and targeted catch, the almadraba is considered by many to be a sustainable fishing method that has remained unchanged for centuries. 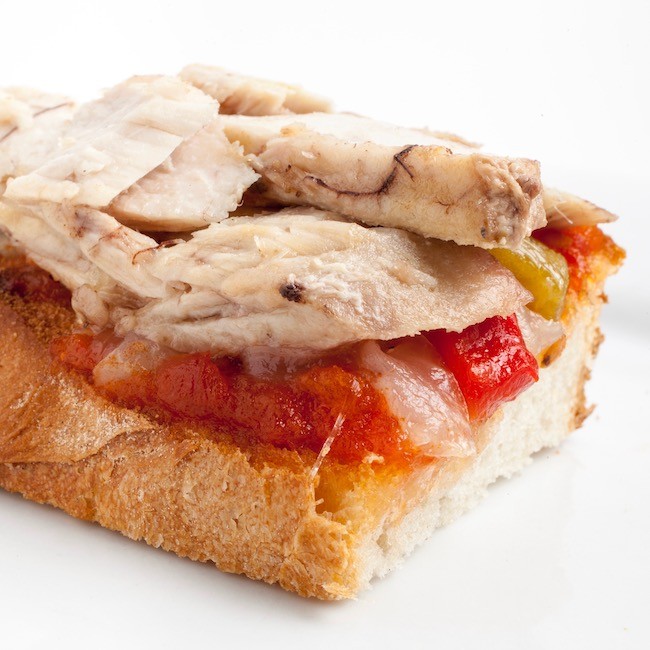 While the English-speaking world refers to bluefin tuna, the Spanish appropriately call it atún rojo or red tuna celebrating its deep, ruby red flesh. This is revealed by the broad knife-wielding maestros, master fish butchers, who fillet the fish in the processing facilities using a technique called ronqueo, a word that imitates the sound of the steel blade slicing through the tuna. Up to 24 different cuts are taken from the tuna. Every part of the fish is used, from the rich tuna collar or morrillo to the loin that is salted and preserved to make the maritime version of jamón – air dried mojama. For the seven weeks or so of the almadraba, fresh tuna hits the markets and restaurants of Cádiz, Seville, Madrid and all around Spain. In the coastal towns where the tuna is caught, tuna is served raw as tartar, carpaccio even sashimi showing a growing appreciation of the flavour of fresh tuna. Tuna is still popular in traditional dishes such as atún encebollado, pieces of tuna cooked in a sweet, rich sauce made with onions, saffron and dry fino sherry from the same region. Perhaps the most desirable cut is the belly, or ventresca. Interlaced with layers of intramuscular fat, tuna belly is a rich, deeply flavoured cut that fills the mouth with luscious, unctuous fat but with a clean meatiness and lingering sense of delicious umami.

Thankfully, for the rest of the world, the Spanish are masters of preservation. They take the best of the seasonal harvest and find a technique to lock in the flavour. Their culinary tradition of conservas sees the finest seafood, vegetables and fruit carefully and laboriously preserved under glass or tins. One of Spain’s most popular conservas sees tuna belly carefully sliced, seasoned, laid out in tins or jars by hand and covered in either brine or fine olive oil. Pasteurised and packed in beautifully designed artful packaging, conservas de ventresca de atún or preserved tuna belly is sent from processors along the Cádiz coast, across Spain and around the world. In Spain it is a premium product. It could be served in a popular waterside bar in Cádiz with a glass of ice cold glass of fino sherry. In the Madrid, a chef could open a tin of tuna belly and use it to make a salad with fresh, ripe tomatoes, finely sliced red onions, tuna, salt, extra virgin olive oil and sherry vinegar. This is a classic summer salad from the south, now popular across Spain. One of the most noted  conservas producers is Herpac, in Barbate south of Cadiz. José Mariá Vázquez Varo, Herpac’s Marketing Director says, “Ventresca is the part of the tuna most requested by restaurants and one of the most expensive pieces,” he says.  “Here in Spain, it is eaten raw, grilled or preserved. People around the world can enjoy this taste of Spain by trying conserva de ventresca – preserved tuna belly.” 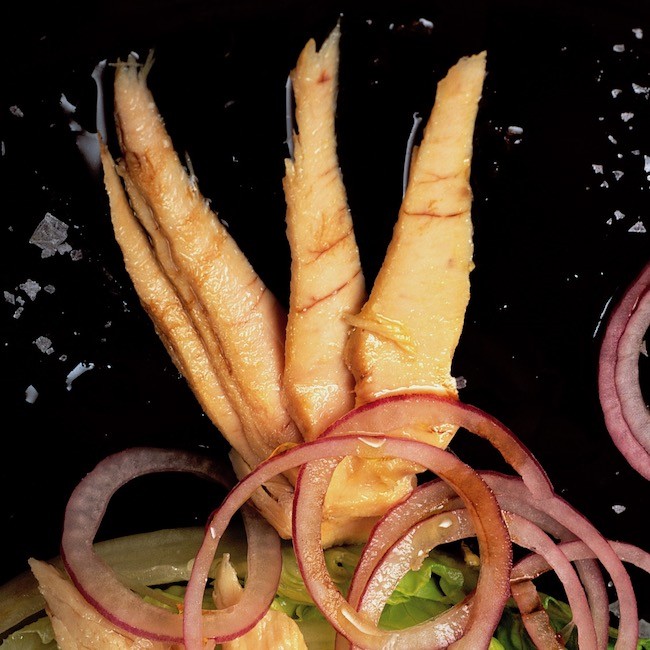 A Gift From Spain’s South

While the almadraba fishing technique is ancient, the fish are processed and preserved in modern state-of-the-art facilities along the Cádiz coast. Processors such as Herpac in Barbate are a household name in Spain and their factory tour has become a tourist attraction in its own right. They produce high end tuna belly, preserved in olive oil exported in both cans and glass jars. Herpac also take the lomo, or loin, and preserve them in the same manner. Brands that use almadraba tuna to make their conservas include Don Bocarte, Gadira and Almadraba de Petaca Chico. The quality of these products is outstanding. Forget everything you ever knew about tinned tuna - only the best goes into a can in Spain. So when you peel back the lid or unscrew a jar of Spanish bluefin tuna belly you are going to taste tradition, dedication to preservation, and the sublime salty tang of wild-caught tuna. You can enjoy its mouth filling deliciousness, superb texture and clean finish for tapas, salads, bocadillos or sandwiches, or lunch on the run. This is a high-end product with both a long history and a sustainable future.