Imagine growing up in rural 1970’s Spain. Your parents open a typical restaurant and, eventually, after studying, you follow your heart to revive the gastronomic scene of the region, developing the first Michelin starred restaurant in the area. Now meet Miguel Barrera, celebrated chef living this very dream, taking Valencian cuisine by the horns, the fins, and the stalks with his innovative creations.

A man with Valencian produce pumping through his veins, Barrera is so serious about the region’s famous paella that he will not serve it in his fine dining restaurant (more on this later). Instead, he shares his secrets for the perfect paella with us - just in time for International Paella Day on the 20th of September.

First, Barrera gives us the lowdown on his restaurant’s culinary progression from El Paraiso to Cal Paradis. “Alongside my girlfriend - who would become my wife - I rebuilt the whole infrastructure.” The chef joined his parents’ business after completing his studies and, in 2004, they strove for something more gastronomic at the old El Paraiso restaurant, rebranding from the ground up.

Completely in love with his native land, Miguel explains why he uses mostly local produce in his restaurant (renaming it Cal Paradis to reflect the Valencian dialect). “Our cooking is influenced by our environment – we cook what is close to home. We’re focused on what the orchard brings us, and what the sea gives us.” 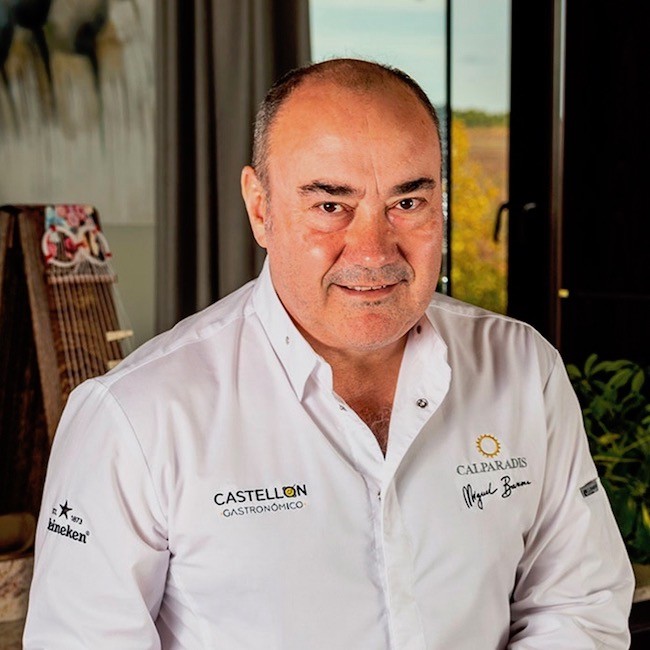 What makes this part of the Valencia region unique is that it is long and thin, with very little distance between the coast and the mountains. So, the fresh catch of the day from the fishing nets of the Mediterranean is just 20 minutes from Cal Paradis, there’s an orchard 25 meters away and 20 minutes in the other direction is mountain truffle country. This part of Castellón seems to have its very own ecosystem. But Miguel maintains that, although he is more interested in food from the surrounding land (“Castellón: the great unknown”, as he calls it), he doesn't rule out produce from further afield when it fits the dish.

When asked what is indispensable in the Miguel Barrera kitchen, he talks about seasonal ingredients. “Right now, we have some amazing tomatoes, so we’re making fresh dishes with those, as well as fish like mackerel, meat and summer truffles”. A staple ingredient always essential at Cal Paraiso? It’s got to be a good olive oil.

And now, for the burning question: how do you make an authentic paella? When Miguel was a boy, paella was a cornerstone of family get-togethers. He defines the three main regional versions as from Alicante, Valencia, and his native Castellón. His grandparents’ recipe details rabbit, chicken, pork ribs (optional), tomato, garlic, green beans, red pepper and, in winter, possibly artichoke and lima beans, then saffron and water. “Paella has meat, vegetables and water and that’s it. It doesn’t contain prawns or cuttlefish or any of those types of ingredients - those are in arroces (rice dishes)”.

“Paella is a name that must be respected” - Miguel is a defender of traditional Valencian paella, as a key part of his heritage. He was born a cook, born into paella, he lives it and he has studied it. “For this reason, I don’t serve paella in my restaurant. My restaurant is about gastronomy, and paella requires such dedication that it needs to be the central focus”.

Another important factor is that an authentic paella is always cooked over wood fire. So, what else must we think about when striving to achieve the Valencian dish?
“The rice is a great carrier of flavor owing to its porosity”. The choice of rice is very important as the key to the cooking time. Barrera uses a round grain from the rice fields of Albufera de València and he adds it at the moment when the fire is hottest (around 400F). The rice should cook as such for around seven minutes, then reduce the temperature for the rest of the cooking time. “For the last few minutes, the paella goes under the grill to create the socarrat (the charred flavor)”.

“The real key to the paella process is this: after heating the oil, the sofrito (slow fry of vegetables with meat to create the base) needs to be done slowly but done well. The vegetables to add (in order) are red peppers, green beans, lima beans then tomato and salt. Some people say one part rice to two parts water but this isn't so - there could be five or six times more water than rice. My father always kept a little stock aside in case it was needed later on - this is a good tip. And put the garlic in at the end. These are very personal choices but the most important is the sofrito. And, of course, the saffron”.

And what does Miguel Barrera think of chefs around the world and their paella variations? “Let’s be clear, a traditional Valencian paella is one thing, anything else is an arroz (rice dish)”. Miguel is not so affronted by foreign and international chefs making paella with other ingredients, but he doesn’t have a lot of time for Valencian chefs who should know better. The thing is, Miguel continues, paella means much more than rice for Valencians. “When we meet as a group of friends and family, it’s always around a paella”. The occasion becomes a round-table meeting, reflects Barrera, “where many things are resolved”.

Not only do all Valencians know how to make a paella, laughs Miguel, but they all claim to make the best one on the planet. “I don’t know how many people live in Castellón but, when I talk to my friends, every one of them says “I make the best paella” so there must be about 50 thousand people believing that their paella is the best. Well, I thought, if there are that many, I’ll stick to fine dining!”

If Miguel Barrera were to make you the best paella in the world, he would cook it with the same love and care that has survived generations and invite you to share it with his family and friends. When it comes to wine, he suggests something regional with body to cut through the meatiness - think Garnacha Tinta or a Bobal red wine. In Valencia, explains Barrera, “quedar para comer” is not just meeting to have lunch, but sharing a paella and also a way of life.