Wine and cheese pairing expert Laura Werlin tells us how to pair cheese and wine for a lovely evening! Spoiler: the possibilities are endless.

“What grows together goes together” is an oft-used adage to guide food and wine pairing choices. If lamb is a signature dish in a region, then drinking the red wine of the region stands to reason. But as with all such maxims, there are exceptions, especially when it comes to wine and cheese pairing. Not just exceptions but also a desire to break out and put what we want on our tables, not necessarily what convention tells us to do. That’s why you may want to think outside the box for your next wine and cheese party.

Regional pairings are reliable and delicious, but pairing wine and cheese together successfully can be done a multitude of ways. Luckily, the wines and cheeses made in Spain are spectacular no matter where they’re from, which makes pairing them a slam dunk. This also ensures a Spanish wine and cheese party will be a success. First though, there are a few things to keep in mind for any wine and cheese party:

Now that you have a starting point, here are a few themes that will bring your pairing party from good to great. ¡Olé! 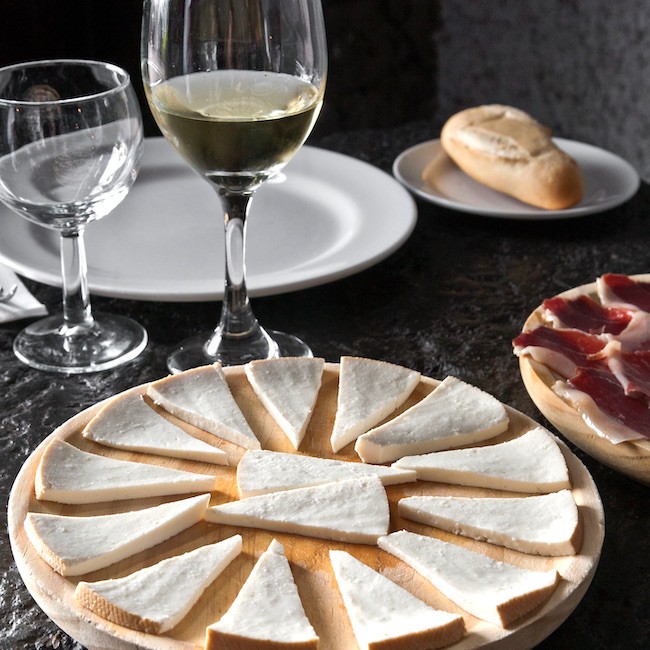 There’s no question that white wines are the sleeper hits of Spain. Verdejo, the white grape from Rueda in Castilla y León, is Spain’s number one selling white wine. It’s also the Netherlands’s top selling white wine! Never heard of it? It’s on the rise in the U.S. too.

Probably the best-known Spanish white grape in the U.S. is Albariño from Rías Baixas in Galicia. Like Verdejo, the citrusy, beautifully balanced, multi-dimensional grape loves almost all foods. Other white wines – Viura from Rioja, and Godello and Garnacha Blanca from various regions – are also becoming ever more popular.

This is all good news for a warmer weather Spanish wine and cheese party. These refreshing white wines love lighter cheeses. Luckily Spanish cheesemakers are answering that call more than ever. Here are a few cheeses to consider.

Caña de Cabra: This log-shaped goat cheese from Castilla y León sports a so-called bloomy rind (think Brie) and is almost silken close to the rind and creamy but a bit firmer as you go toward the center. It’s tangy, lemony, buttery, and earthy – everything you want in a springtime cheese and everything you want with a white wine.

Leonora®: Also from Castilla y León but made on a much smaller scale, this brick-shaped goat cheese also has a bloomy rind. But unlike the Caña de Cabra, Leonora® is made by just one person. Cheesemaker Oscar Fernandez Marcos Gonzalez is the master behind this extraordinary cheese.

Roncal: A sheep cheese from northern Spain, this can range from slightly gamy to buttery, grassy, and almost always tangy. It’s a perfect match with Spain’s white wines and a fun alternative to Manchego.

Queso de Murcia: This is a semi-soft goat’s milk cheese from its namesake Murcia, where goats dominate the milk landscape and therefore the cheese. Because of its mildness, it is perfect for white wine.

Los Cameros: It stands to reason that this three-milk cheese from Rioja pairs beautifully with the local Viura (Macabeo) grape. What isn’t as obvious is that this extraordinary cheese is made by the second generation of a cheesemaking family and that it is 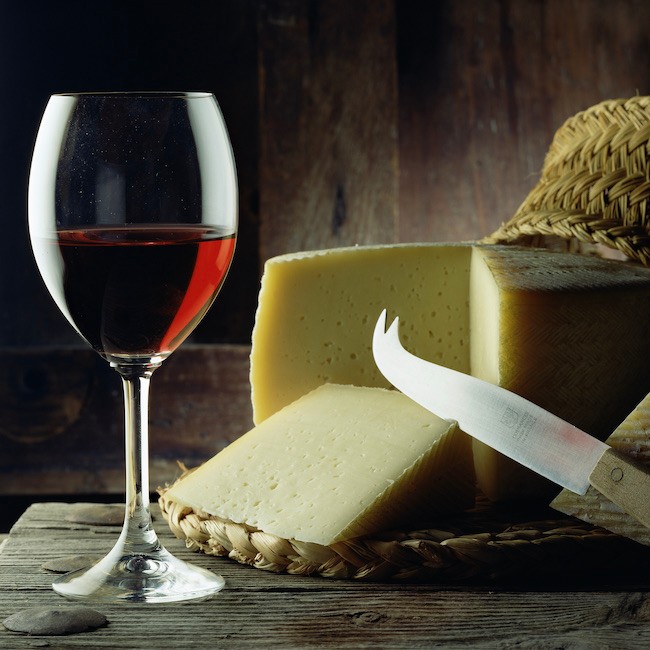 Cava: This sparkling wine is sometimes referred to as the Champagne of Spain. But don’t call it Champagne. Just like its famous French sibling, the Cava name may only be used when the grapes are grown in the region called Penedés in southwest Spain, and the method used to make the wine is the so-called traditional method – one that calls for a second fermentation in the bottle. The three main grapes used in Cava are Xarel·lo, Macabeu, and Parellada. As with most sparkling wines, acidity runs high in Cava, and flavors like lime, apple, and almond are prominent.

Garnacha Blanca (aka Grenache Blanc): This grape is grown throughout Spain, which makes it a great candidate for cheeses of all kinds. It is medium- to full-bodied, a bit tropical, a bit spicy, sometimes higher in alcohol than other whites, nice acidity to balance it, and apple and stone fruit flavors.

Ribera del Duero Tempranillo: In this north-central region of Castilla y León, Tempranillo is king. Unlike other regions in Spain where the same grape is grown, the resulting wine is a bit dustier and a bit more tannic. Still, it bursts with both red and black fruit depending on the location of the vineyard and how long the wine has been aged among other factors.

Jumilla Mencía: Head to the opposite side of the country to the Jumilla DO – a place that holds one of Spain’s oldest Denomination of Origin designations – and you’ll find a red grape that is decidedly high in tannins, bold, a bit smoky, and quite delicious. This grape known as Monastrell in Spain and Mouvèdre in France and other places, is distinctive because of its big personality.

Caña de Cabra: Great with almost all white wines, this gorgeous goat cheese log of tangy and creamy deliciousness also loves refreshing bubbles. So too acidity. Cava answers that call and then some.

Garrotxa: Also a goat cheese, this one has a crusty rind and is aged at least two months. It develops nutty flavors but retains a buttery youth that makes it one of the best snacking cheeses in all the world, not just Spain. Cava, Garnacha Blanca, and light red wines love this cheese.

Cabra de Murcia al Vino: As the “Vino” in the name implies, this Murcia-made cheese gets a wine bath before it’s wrapped and sold. Known as Drunken Goat in the U.S., this semi-hard earthy and yet sweet cheese may or may not be a perfect match for its bold wine neighbor, Jumilla, but it’s sure fun to have together anyway.

Manchego (6-month): Almost nothing is better than a six-month aged Manchego, particularly when in the hands of smaller artisan producers, but Spain’s most famous cheese didn’t earn its fame for nothing. Made exclusively from the milk of the Manchega sheep in the Castile-La Mancha region of Central Spain, a six-month aged version retains some a somewhat creamy rather than grainy texture and yet also starts to veer into nutty and maybe even sweet territory. This makes it a perfect match for a Ribera del Duero Reserva – a wine that is aged at least three years. The wine is distinctive but not so big that it overtakes the “teenaged” cheese.

Zamorano: So named because of the Zamoran province in which it’s made, it is often compared with Manchego. However, the sheep breeds whose milk is used to make this cheeses Castellano and Churra – are different than Manchego. This results in buttery, tangy flavors when young and melted butter, butterscotch, and fruity flavors when aged. 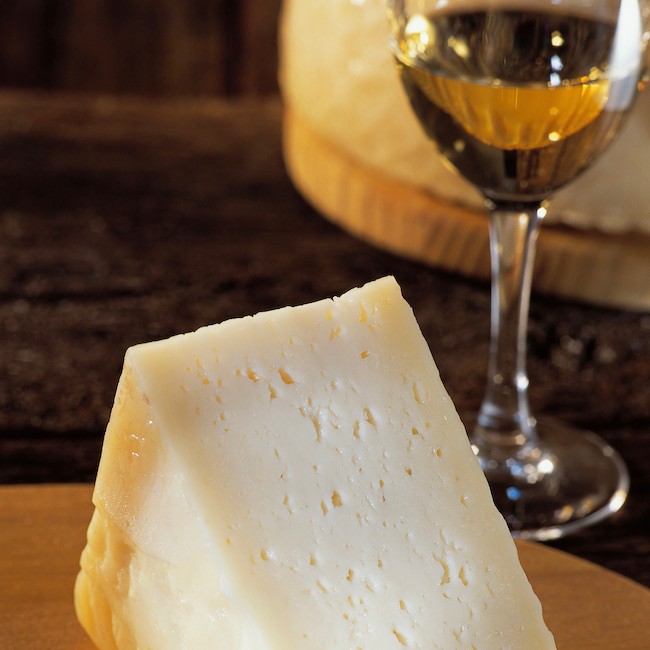 Perhaps surprisingly, a few noteworthy cheeses are made on the islands off Spain’s western and southern coasts. Luckily, the diverse styles of these cheeses form a friendly bridge to the wines of the mainland and in turn, establish a perfect party theme. First, the wines:

Viura (also known as Macabeo): Although this floral and citrusy white wine from Rioja is often sold in its youthful stage, it is also capable of aging to become richer and more full-bodied. Because of this range, it pairs well with a variety of cheeses. You can also look for other whites wines as Grenache Blanc, aged Verdejo

Garnacha: Grenache in English, this chameleon-like grape can be big and bold as it is in the Priorat region of Spain, or more delicate and floral in the northwestern part of the country. It is the latter version you want for this party as its bright red fruit flavors won’t overpower the relatively delicate cheeses.

Rioja: Like the Tempranillo made in the Ribera Del Duero, Rioja Tempranillo is made in different styles. For cheese pairing, the younger styles called Rioja and Crianza tend to be the most compatible because they’re a little more fruit-forward and less tannic than their older siblings. In the case of this island party, the Rioja will get along very well with all the cheeses on the table. Other reds to look for: Ribera del Duero Tempranillo

Alisios: This pimentón-coated mixed milk cheese – 70 percent cow’s milk and 30 percent goat’s milk – is made on the island of Fuerteventura in the Canary Islands west of Spain and will brighten any cheese party with its rust-colored rind and sweet flavors within. The firm cheese is also a bit nutty and slightly tangy, making it a great candidate for white and red wines alike.

Cabra al Gofio: This unusual cheese is also made on the island of Fuerteventura. The “cabra” in its name indicates it is made with goat’s milk, and gofio refers to the toasted corn flour used to coat it. Together, the cheese that emerges is sweet, mild, and yes – a little corn-like.

Queso Majorero: Yet another from Fuerteventura, this cheese gets its name from the Majorera goat breed whose milk is used to make it. Its texture is creamy and smooth, and its flavor is both buttery and tangy. Fun fact: this was Spain’s first goat cheese to be given a Denomination of Origin status. There’s even a Queso Majorero museum!

Mahón Reserva: Hailing from the island of Menorca off the eastern coast of Spain, this cow’s milk cheese is one of Spain’s most enduring and delicious offerings. The square cheese with the rounded corners is rubbed with olive oil to prevent it from cracking during its year or so on the aging shelf. The result is a nutty, hard, almost cheddar-like cheese that, best of all, is red wine friendly.