Ask the Expert - Alberto Carballo on Pulpo a la Gallega

Getting our tentacles around everything pulpo a la gallega, we talk to Albert Carballo, executive chef at Casa Dani, NYC,  about the wonders of this Galician delicacy.

This month we get our tentacles around one of New York City’s favorite Spanish dishes, talking to Albert Carballo, executive chef of Casa Dani about the famed Spanish delicacy that is pulpo a la gallega. Let’s ask the expert!

Can you give us a bit of your background with pulpo a la gallega?

“My homeland of Bierzo, Spain, is culturally part of Galicia - although not geographically - and I studied culinary arts in Galicia so I’m very familiar with it. My background in pulpo? Well, growing up, it was my favorite thing as a kid. My mum would make it, usually on Saturday for lunch. Something that she does differently is she cooks the potato in the water of the octopus, so the potatoes come out kind of purple! I’ve never seen that anywhere else than in my mother’s kitchen. I ate pulpo as a kid and where I’m from there are a few places where the signature dish is pulpo a la gallega.  So it’s become part of my upbringing.”

What is the history of pulpo a la gallega?

“Back in the day when there was little refrigeration, the market buyers from the area called La Maragatería in Castilla y León would buy the octopus when it was dried. They would take it from Astorga to these areas of Castilla y León and the way they would eat it was to rehydrate it and add olive oil, salt and pimentón; smoked paprika. Thanks to these traders, the Galician people saw a new way to eat pulpo and they called it pulpo a feira - translated as market octopus - so it was the first recipe. Then they added potatoes, that is the main difference with pulpo gallego.”

How do you identify a good pulpo a la gallega?

“Like with every other dish - it’s based on the quality of ingredients. If you use a good potato, a good octopus, a good olive oil, a good pimentón; you have a good pulpo a la gallega. Back in the old days they used to tenderize the meat by beating it, because the fibers are so strong, but over the years they have noticed that by freezing the octopus - which is mainly water anyway - the water crystallizes, and this breaks the fiber, making it more tender. But, important to note, pulpo a la gallega has to have a little bit of bite, it cannot be completely soft. They used to hit it then, in order to asustar (or shock) the fibers, place it in hot water three times and then leave it to cook. I don’t really believe in this, but it was the traditional method of cooking the pulpo.”

Why do you recommend Spanish pulpo over the rest?

“The main difference between the octopus from Spain and everywhere else is that Spanish octopus lives between the rocks so its tentacles are thinner, but they are always eating seafood - the really good stuff that comes from Galicia. From somewhere else, the food they have is not as good. You have to try a Spanish octopus and then a different octopus to really see the difference, but basically Spanish octopus feeds on the expensive food!” 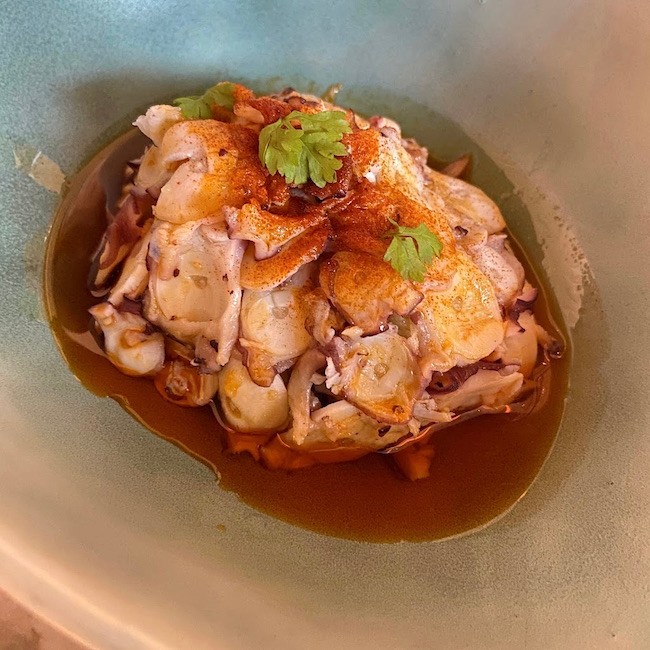 Which aspects are Important when preparing pulpo a la gallega?

“Well, the comment about shocking it three times before boiling - this helps keep the skin intact, which is important, and then the pulpo has to have a little bit of bite or chewiness. It has to be served with potatoes - I like new potatoes that are sweeter, like the mona lisa - and the right extra virgin olive oil and pimentón de la Vera.”

What is your favorite dish to accompany pulpo a la gallega?

“I wouldn’t pair it with anything else. When I eat octopus and, where I’m from, you go to eat the octopus, not other tapas. The bread is important - like sourdough bread - and the wine, an Albariño. This is the wine that hails from Rias Baixas  DO, the same region as the octopus.”

What kind of pulpo can we find in Casa Dani, NYC?

“We have two pulpo dishes.  We have one dish that’s not pulpo a la gallega, because the potato we use is called papalina -. It’s a very Andalusian style of making potato with other things like onion, green pepper, vinegar and olive oil - like a mashed potato, so it's not a typical cachelo (potato dish). But we do put a little bit of pimentón - instead of olive oil we do a pimentón oil, flavored with other vegetables so it’s a little different. In New York you can find pulpo a la gallega, but we wanted to set our dish apart. Then the other dish we have is a black rice paella with octopus tentacles. This type of Spanish food is more normal for people now in the city, as people are becoming more used to these dishes from Spain in general.”

And finally, where in NYC should we go for a pulpo a la gallega?