Chef Ángel León's interest in creating charcuterie from the sea is spreading, with new chefs doing their part to contribute to a decidedly Spanish innovation.

It was 2011, and a young chef who had just earned his first Michelin star was amazing the auditorium at the Madrid Fusion gastronomic conference. Ángel León, nicknamed the chef of the sea, presented his marine charcuterie to the audience. The "Ibérico marine charcuterie" came from León's discovery of "a fish with considerable fat, such as mullet, due to its consumption of marine plankton, which enables us to take advantage of this surplus to make marine sausage, chorizo, loin, and morcón", explained the Andalusian chef at the time. Marine sausages have set out on a unique journey.

Since then, this chef has continued to innovate but has delved into the possibilities of using oily fish to emulate Ibérico pork: jurel sobrassada, chicharrones (a type of sausage typical of Cádiz prepared with pork belly) made from moray eel, and marine ham. Marine ham? Yes, but the difference is that it's made with tuna belly instead of Ibérico pork leg. Presented at the 2021 edition of Madrid Fusión-Alimentos de España, it's cured with salt as if it were a traditional ham, although the difference is that it tastes of the sea. "This project gives us the chance to talk about tuna cuisine with a different perspective, looking to the future," explained the chef to an astonished audience at the conference. At his restaurant, Aponiente (which bears 3 Michelin stars, in El Puerto de Santa María, Cádiz), it's part of the tasting menu, and León often makes an appearance in the dining room to slice it and serve it as if he were a professional ham carver... 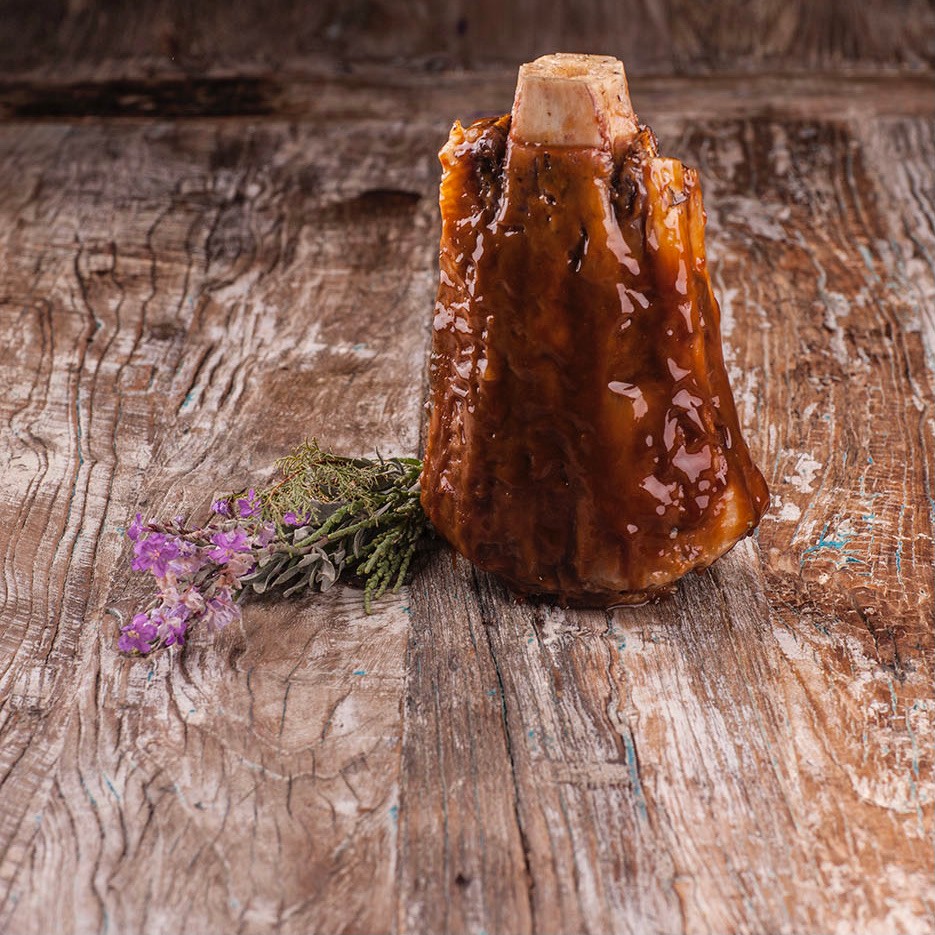 The shock wave of marine sausage

What's curious is that, even though everyone considers León to be the father of marine sausages in Spain, a year before his unique presentation at Madrid Fusión, another young chef, Ricard Camarena (2 Michelin stars at his restaurant in Valencia), had already dabbled in marine charcuterie by making two sausages, similar to blanquet and black pudding, from the fat and the less noble parts of the tuna belly. That was at Madrid Fusión in 2010.

Another Andalusian chef, the very well known Dani García, with restaurants in Spain, New York, and Dubai, has also experimented with marine products to make sausages. At Lobito de Mar, one of his concepts in Madrid and Marbella, he offers his customers a tasting of marine charcuterie he made himself. It usually includes chorizo, sobrassada, butifarra ortuna cake. “The idea behind this dish is to offer a simple charcuterie board, but changing the base pork animal which is replaced by fish, mainly sea bass and corvina. For example, sea bass is used for the base for the chorizo, butifarra and sobrassada”, says Dani García’s team. 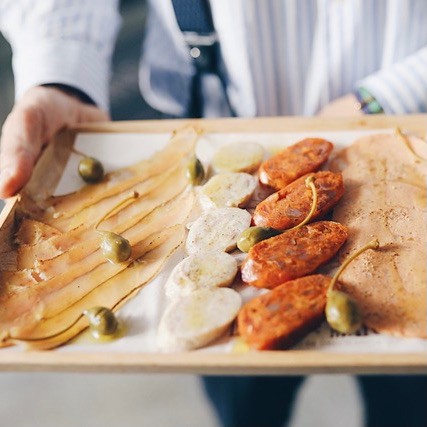 The ripple effect of Ángel León's work even reaches far away restaurants, although only geographically, from Aponiente. Andoni Txintxilla, owner of the Hamarratz restaurant in Zumaia (Gipuzkoa) prepares marine charcuterie using the less popular parts of cephalopods. He's certain that it's a technique that was discovered well before the beginning of the 21st century. "In the end, this is an ancestral technique because it's a method of conservation," he points out. His work is based on managing the product's temperature and humidity. "You have to be very skilled so that the fish doesn't deteriorate. I ensure that the negative bacteria either die or are slowed down."

He focuses mainly on the octopus. "In Zumaia, the tradition is to dry the octopus, and I offer a modern take on that tradition," he explains. In his case, he takes advantage of one of the parts that is normally discarded, the head, to make a sausage that surprises everyone who tries it. Another favorite fish of his is the grey mullet. "I've used the mullet to make thematic proposals of various sausages: mortadella, fuet, salami, chopped pork...". Another challenge that these creations bring are the casings with which the marine ingredients must be stuffed. In the case of Txintxilla, he uses halal lamb casings, and sometimes casings made with seaweed. 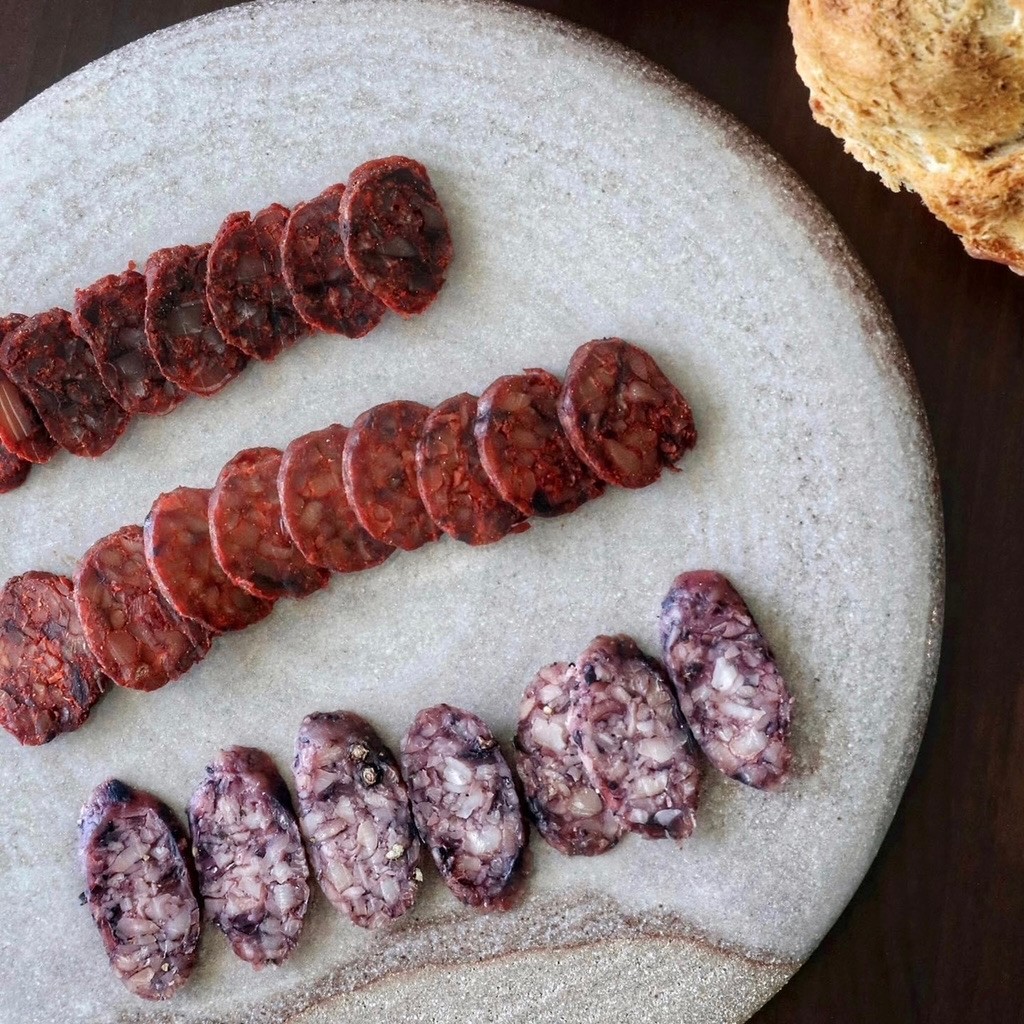 At Hamarratz, which seems like a distant cousin of Aponiente, the focus is on sustainability and the use of underused parts of the fish, or undervalued species. Another of his initiatives has to do with the use of farmed fish, for which he has even created a space within the restaurant's facilities."We have a pond of salmon trout, and at some point we have made magnificent sausages from them, due to the large amount of fat in this fish," he says. A project that is as innovative as it is sound in its support—"we're collaborating with marine biologists"—since it's based on strong roots: the childhood memories of this Basque chef and his family during pig slaughter season in Extremadura. Snippets of a millenary tradition that now has a marine flavor.