Cuenca has a varied gastronomic offer and unique activities, including wine tastings in the cathedral and open-air dinners at museums

Cuenca has been chosen to hold the coveted title next year as the 2023 Spanish Capital of Gastronomy. Third time’s a charm for the city, which applied in 2017 and 2018.

The city will be pulling out all the stops in the next year, with new restaurant openings, easy access thanks to the low-cost high-speed train, and the impressive  and recently inaugurated Los Hoces zipline, one of the longest of its kind in all of Europe. Cuenca is already home to a very varied gastronomic scene complete, which has seen considerable culinary innovation in recent years.

Among the restaurants to watch out when in the city are Las Casas Colgadas and La Casa de la Sirena, (by chef Jesús Segura) and Raff. All them are recommended by the Michelin Guide.

Traditional dishes to try in Cuenca are zarajos, made of marinated lamb intestines. Ajoarriero, a cold paté made with potato, olive oil, cod, garlic and egg, is also a popular option. Finally, morteruelo is a hot paté made of pig liver and small game meats. 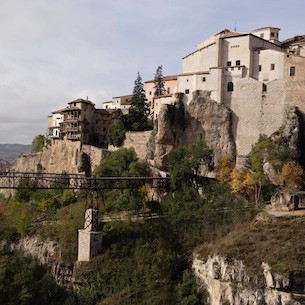 Cuenca has been working hard to further bolster its image, organizing a wide range of culinary and cultural activities such as hot air balloon rides, events at the local science museum and gardens, wine tastings in the city’s main cathedral, and dinners at landmark locations, such as the San Pablo Bridge and the Paleontological

Museum. Other attractions include the Museum of Abstract Art, and the festivities organized during Holy Week.

This opportunity will indubitably put Cuenca on the culinary map, and should increase tourism among people who appreciate delicious food and culture.