The suitable climate and rich fish stocks around the Spanish coasts, as well as the need to preserve fish (among other reasons, to meet inland demand), have favored fish salting in Spain since time immemorial.

Of special interest is the dried, salted tuna called mojama, which is still one of the most typical and popular delicacies of the province of Cádiz and other neighboring parts of Andalusia.

Other traditional Spanish salt fish include the products from Murcia made from Atlantic bonito (Sarda sarda), bluefin tuna (Thunnus thynnus), porbeagle (Lamma nasus) and mackerel (Scomber scombrus). After salting and drying in the sun, the fish obtains a marked briny flavor and a texture that varies from species to species. Dried sardines are another classic salt fish product in Spain. Fish roe is also salted, resulting in an exquisite delicacy with a characteristic flavor.

Finally, although the raw material does not come from Spanish waters, mention must be made of salt cod (bacalao), a product that occupies a place of honor in the history of Spanish gastronomy. The cod found on the Spanish market is Gadus Morua or Atlantic cod. Centuries ago, Basque fishermen used to catch it in the frozen northern seas. The salted fish was then sent from the Basque Country to the rest of Spain. Once considered a staple food, salt cod is a great favorite in the regional cuisines of Spain, especially those of the Basque Country and Catalonia.

Tuna and other fish

Spain is the world’s second largest producer of canned tuna fish and tuna-related products, and the undisputed leader in terms of quality. Canned tuna accounts for 55% of Spanish canned fish and shellfish products.

The tuna canned (or frequently bottled) in Spain usually comes from one of three species – albacore tuna (Thunnus Alalunga), yellowfin (Thunnus Albacares) or Skipjack (Katsuwonus pelamis). The canning tradition initially developed around the exceptional albacore tuna from the Bay of Biscay.

Another area with a longstanding canning tradition is the coast of Cádiz (Andalusia), where tuna are caught with the almadraba, or trap-net system, that has been used for thousands of years to catch the fish as they pass through the Strait of Gibraltar. With Protected Geographical Indication (PGI) Melva and Caballa de Andalucía status, almadraba tuna is typically preserved – belly, tarantello and trunk – in olive oil.

Although once typically salted, today's prized Spanish anchovies are the semi-preserved (requiring refrigeration) ones from the Cantabrian coast (in northern Spain) and from L’Escala on the Mediterranean coast in Catalonia.

Sardines are one of the most popular and healthy types of canned fish, accounting for around 10% of Spanish canned fish. Another is mackerel. In terms of newer preparations, sturgeon farming has been developed in areas like the Sierra Nevada in Granada (Andalusia) and in the Pyrenees in Navarre and Lleida, for the purpose of canning the caviar.

Along the rich coasts of Galicia, top-quality crustaceans and mollusks are fished and cultivated, many of them for canning. Galician mussels, which have Protected Denomination of Origin (PDO) Mejillón de Galicia status, are a key product in this respect, thanks to their excellent flavor and deeply orange color. Production is carried out on thousands of rafts called bateas located in the rías in Vigo, Pontevedra, Arousa, Muros-Noia and Ares-Betanzos. Most of the mussel canning plants are located in these areas. The usual preparations for canned mussels are in a pickle sauce or olive oil, although they can also be found in brine and other sauces. As with other canned mollusks, the product is usually classified by size, and the label must stipulate the number of pieces per can. The fewer the pieces, the greater the size and, therefore, the value.

Other important canned Spanish mollusks include clams, cockles and razor clams – all of which are typically preserved in brine – and, to a lesser extent, oysters and scallops.

Squid and octopus are also canned, typically in olive oil or, in the case of squid, in their own ink.

Spain’s plentiful vegetable and fruit crops traditionally supplied a wealth of products needing preservation so that they could be consumed year-round. With the invention of canning and sterilization systems in the 19th century, small-scale, family-run businesses developed, forming the backbone of what were to become large vegetable processing companies. These have now existed for decades and are mostly located in the areas where the products are grown. The leaders in this sector are the regions of Murcia and Valencia, followed by the Ebro valley or, more specifically, Navarre and La Rioja. The latter have a longstanding tradition in the production of vegetable preserves, especially asparagus, peppers and artichokes. Other regions growing and canning vegetables are Extremadura, Aragón, the two Castiles, Andalusia and Catalonia. Many tomato preserves are also produced all over Spain.

Some of the most famous Spanish vegetable preserves are the PDO Pimiento del Piquillo de Lodosa peppers from Navarre. Although virtually inedible when fresh, after roasting, hand peeling and canning, they become an outstanding delicacy with a silky texture and complex flavor – sweet, fragrant and just slightly hot.

Another well-known variety of pepper used for roasting and canning are those from Nájera (La Rioja), which are the basis for PGI Pimiento Riojano. Others are the roasted Bierzo peppers from PGI Pimiento Asado del Bierzo in León.

Another prized vegetable for canning is asparagus, and particularly those from La Rioja, Aragón and PGI Espárrago de Navarra in Navarre. Other stalk vegetables like cardoon and borage are also canned in this part of Spain. Canned artichokes are considered a delicacy, and particularly those from Tudela in Navarre which have PGI Alcachofa de Tudela status.

Spain’s privileged location in the Mediterranean basin allows it to produce almost ten million tons of fruit annually. Approximately five to ten per cent of this is processed, mainly as preserves, making Spain one of Europe’s main producers and exporters of canned fruit.

Production mostly takes place in the region of Murcia, with peaches (the star product), mandarins, apricots and pears being the most important. Some sub-tropical fruits such as mango and papaya are also produced in canned form.

Many traditional meat dishes are preserved, especially those requiring complex preparation or long cooking times. This might include the typical callos a la Madrileña (Madrid-style tripe), as well as game dishes made with pickled partridge or quail.

Meat and pulse dishes like the famous fabada asturiana (a bean stew made with Asturian fabes, chorizo, black pudding and pork fat) and Rioja-style lentils with chorizo can often be found in their canned versions in Spanish homes.

Some traditional Spanish pâtés are also sold as preserves. An example of this is morteruelo from Cuenca (Castile-La Mancha), a dish made from pig’s liver cooked with hare, partridge, rabbit, ham, pig's liver, spices and rustic bread and crushed to form a paste.

In Catalonia, the Basque Country and Navarre, many preserves like duck, foie gras, pâtés and confits are made in the French style. Would you like to discover Spanish preserved food with Google Maps? 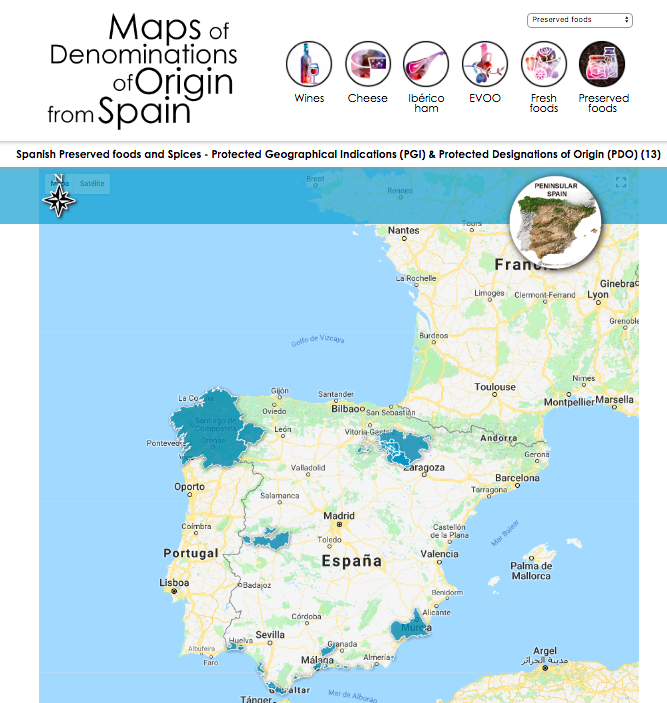 Spain’s plentiful vegetable and fruit crops, fish captures and meat elaboration methods traditionally supplied a wealth of products needing preservation so that they could be consumed year-round.