The ancient lands of southwestern Spain have been planted to vineyards for nearly 3,000 years. But this part of Iberia was long under the control of the Moors and Islam, and winemaking was discouraged if not outright forbidden here from 711 to 1492.

To most visitors, Andalucía appears as more moonscape than landscape; hot and arid, rugged and hard, it conforms to the image many Americans have of Spain in general. But Andalucía’s mountains carry other possibilities. With abrupt shifts in elevation, fascinating dessert wines have been produced within areas in Montilla-Moriles and Málaga.

And Andalucía’s most famous wine area, Jerez (Sherry), receives more rainfall than most other parts of southern Spain. That rain is captured by the special limestone-rich soils of the area, called albariza, that bake in the summer sun into a hard crust, trapping cool moisture for the vines’ needs.

Sherry’s multiplicity is a bewildering obstacle for too many people. It’s actually simple: Sherry is fortified wine. It’s fortified after the fermentation, so unlike Port, all Sherry begins its life as a dry wine.

Sherry is initially classified as one of two wines: fino or olosoro. A fino is intended to be a light, crisp, delicate wine even at its usual alcohol level of 15% or more. Yet the great finos are delicate. They are aged in barrel underneath a yeast film called flor (or “flower,” though it looks more like pond scum), and the flor protects the wine from oxygen, adding flavors and aromas as well.

Great finos have the tangy aroma of the flor with its distinct almond character and aromas similar to mushroom and sometimes cheese rind. The finos aged in the bodegas of the coastal town of Sanlúcar de Barrameda take on even more of the aromas of the ocean and are given the distinct name of manzanilla.

Finos that eventually lose their flor will be topped up, fortified to a higher level of alcohol (around 18 percent), and allowed to age into something called amontillado. Amontillados contain echoes of the character of the fino from which they grew, but pecans, honey, caramel, toffee, nuts, dried fruits, and many other aromas and flavors begin to take over.

The other great category of Sherry is oloroso. These are usually made sweet, although a handful of them are left dry. The term oloroso can be loosely translated into something powerfully aromatic, and the long barrel aging required for great oloroso certainly gives it aromas, which might include toffee, walnuts, prunes, cherries, orange rind, spices, chocolate, and myriad other delectable, dessert-like characteristics.

Sherry is also defined by its solera process of aging. Solera is a system of graduated blending whereby a portion of Sherry is drawn from an old barrel, which is subsequently filled from a barrel of younger Sherry. Barrels of younger and younger Sherries cascade downward so that old and new Sherries are gently and systematically blended together.

Sherries can be designated as Twelve Year Old. Fifteen Year Old, VOS or VORS (see glossary), and are Carbon-14 tested to verify their minimum average age. We know of no other similarly rigorous testing in other wine regions of the world. 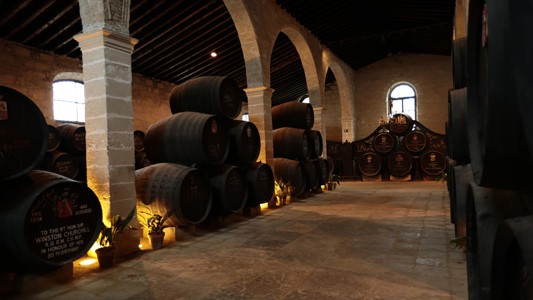