Mojama, hueva, anchovies, bacalao: take a look at these ancient delicacies that are extremely enjoyable tapas

Of the handful of countries that use salt-curing as a tried and tested technique, Spain certainly boasts the greatest range of specialities. These include addictive bacalao (salt-cod), mojama (loin of tuna), hueva (fish roe) and salted anchovies. All have robust, distinctive flavours and are produced in coastal areas from Catalunya to Valencia, Murcia, Cadiz and Cantabria. Some are much appreciated as tapas in wafer-thin slices with a handful of salted almonds and a chilled beer or fino – nothing better!

In fact these delicacies are nothing new as it was the Phoenicians who, some three thousand years ago, during their lengthy voyages across the Mediterranean, discovered how to use sea-salt to preserve bluefin or albacore tuna. Over the centuries, that discovery was adopted first by the Greeks, then by the Romans whose culinary ingenuity also stretched to a particularly pungent fish sauce: garum. Pliny referred to it, and the ancient Roman cookbook, Apicius, featured numerous recipes in which garum replaced salt. In order to feed the insatiable appetite for this condiment back home, Hispania fostered dozens of processing factories where the innards of oily fish such as sardine or mackerel were salted and fermented. These dotted the coastline of the Levant while in Andalucía, Málaga was a coveted source as well as, in the far west, Baelo Claudia in Cádiz. Today, the umami-rich sauce is making a comeback at innovative restaurants like Dos Pebrots in Barcelona, where even squid innards are fermented in sea-salt brine to obtain rich, savoury depth. Garum may be ancient – but watch this space. 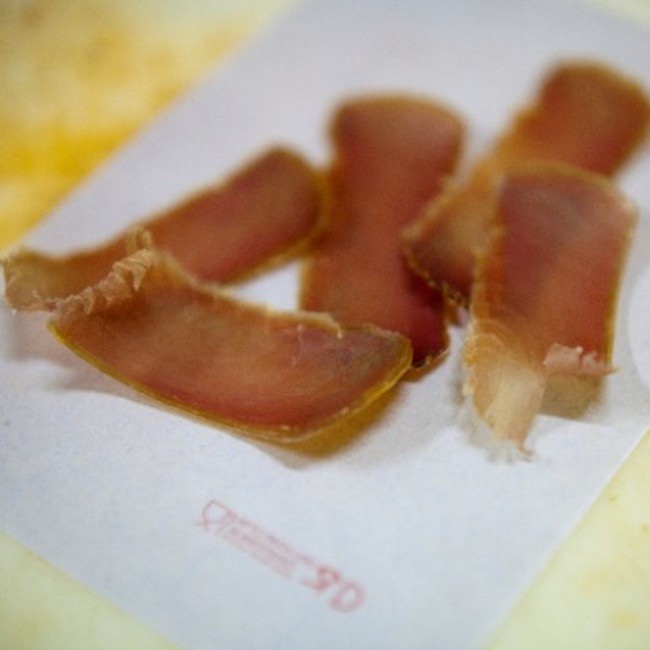 Mojama, the Iberic ham of the Ocean

One of Spain’s most revered salt-cured delicacies is mojama, a word which derives from the Arabic musamma, meaning ‘made into wax’, a perfect description of this silky smooth, dark brown slab of tuna loin. Barbate, in Cádiz, is the capital where artisanal salt-curing and wind-drying factories exploit their breezy location in southwestern Andalucía. Here, every May, reigns the almadraba during the annual migration of bluefin tuna from the Atlantic to spawn in the Mediterranean; en route they are trapped by fishermen in a complex labyrinth of nets, a system that, yet again, dates from the Phoenicians. Much of the catch is shipped to Japan, the rest is either consumed immediately or frozen, or is made into mojama de almadraba, the so-called jamón ibérico of the ocean. Yellowfin tuna undergoes the same transformation in Murcia, on the coast of the Mar Menor near Cartagena, where salt-harvesting also flourishes, and albacore (longfin) tuna is processed in more industrial quantities. 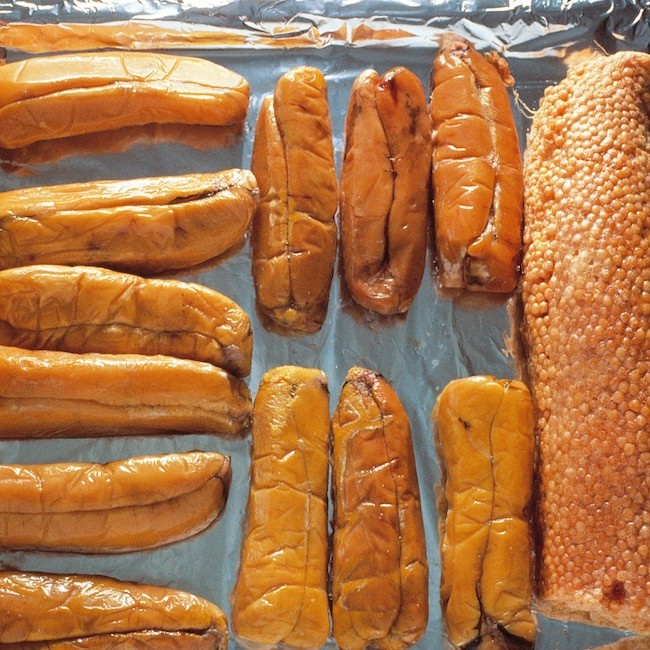 The Levant’s gastronomic religion is hueva, the fish roe (eggs) of tuna, mullet or ling. An incredibly popular tapa is a plate of orange-coloured slices of hueva de atún washed down with a chilled beer or amontillado sherry – it does wonders for the soul. Like mojama, the roe is first salted then air-dried for several weeks to produce compressed, hard blocks; these are very finely sliced or incorporated into salads or fish dishes. Maceration in extra virgin olive oil or grating (for example into pasta) are other preparations that reduce the intense marine flavour. Hueva’s rather divisive taste depends on the type of fish, but hueva de mujól (grey mullet roe, famously known in Sardinia as botarga) is the most umami-rich, its potency comparable to that of dried anchovies. Both nutty and fishy in flavour, black in colour, it has earned two epithets: ‘caviar of the Mediterranean’, and ‘poor man’s caviar’. 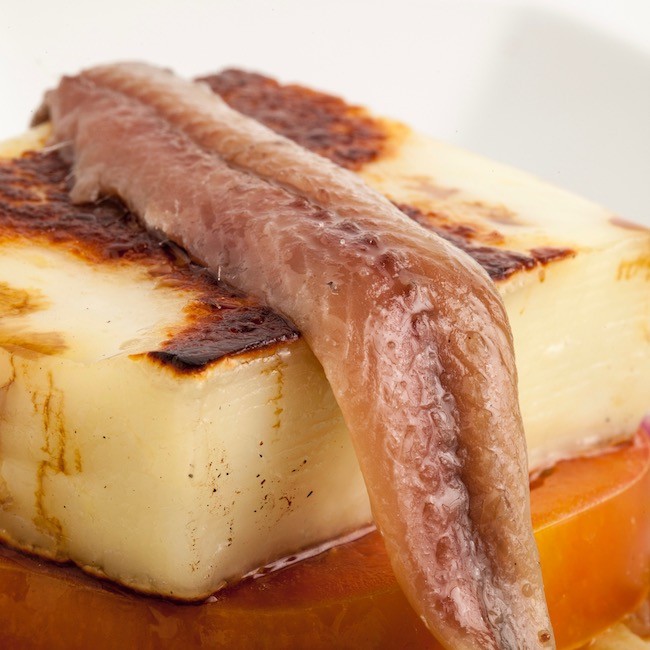 That brings us to salted anchovies, another culinary landmark, this time hailing from Spain’s north coast. Here production was raised to dizzying heights in the 19th century by Italians who descended on the Cantabrian coast to exploit this little fish, once used merely as bait; thus was born the burgeoning anchovy industry of Santoña – whether preserved in salt or olive oil. Another mecca of production is L’Escala, near a former Graeco-Roman site on the Costa Brava, where local enthusiasm has generated both a Salt Festival and an Anchovy Festival. Any anchovy-based tapa is delicious accompanied by a glass of light, peachy Albariño which offsets the saltiness. 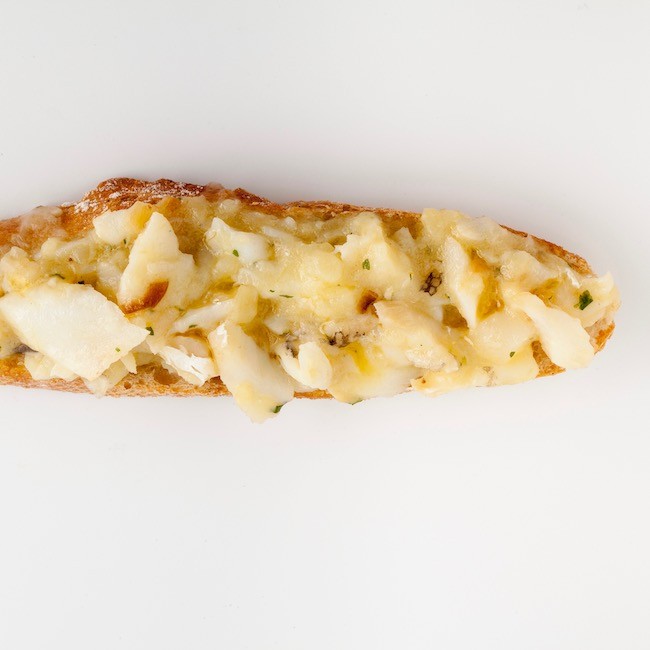 Bacalao, the king of the salazones

Finally – bacalao, the most celebrated of Spain’s salazones, was introduced by Basque fishermen who, centuries ago, sailed as far as Newfoundland to fill their nets with cod. They soon discovered that curing then air-drying their catch in sea-salt for several weeks created a stiff board of moistureless fish with a lengthy shelf-life – ideal for Atlantic sea-voyages. Yet even today, with fridges and freezers, fibrous bacalao holds its own in the kitchen due to the extraordinary, unparalleled shift in texture that results from salting then de-salting – multiple times. Its many preparations, too, win hands down over the fresh product: whether cooked in stews or raw, cut or torn, tossed through a salad or a contributing component to the Basque pil pil sauce, salted bacalao is a revelation - king of the salazones. 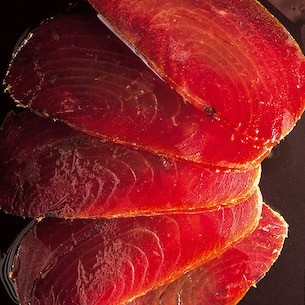